As the battle over Michael's Jackson's estimated $1 billion estate continues, temporary guardianship has been granted to his brother Tito, after concerns of the well-being of Michael's mother Katherine arose, the children's guardian, while she was away in Arizona.

Retired Superior Court Judge of Santa Clara, California, Eugene Hyman says that the courts look at what's in the best interest of the children first and unfortunately, a lot of parents think it's about them.  In dependency court, you have social workers who generate information and investigations for the judge.  In probate court, however, it is a party that is moving.  Someone is coming forward and saying the court needs to be aware that something is going on and as a result, there is an emergent situation and the court needs to make temporary orders.

Looking at the declarations, it's always going to be painted in a direction of seriousness in order to get the court to do something, Hyman says.  He adds that in most of these situations, the respondant has not had a chance to respond because the moving parties say there isn't time.   In this case, although the kids are older, they still are alone and the actual guardian is out of state and has not put something in play for the kids to be safe and so, the court needs to do something on an emergency basis.

Ulimately, Hyman says, there will be another hearing where the actual guardian will give her information to the court.  While he is not aprised as to whether or not the temporary guardian is requesting to be permanently replaced in terms of Mrs. Jackson, right now it's only a temporary request.  Being that Mrs. Jackson is elderly, however, Hyman thinks that at some point, someone is going to try and replace her.

Hyman speculates that this very well could be a vieled attempt to get control of Michael's estate but without more information, it's hard for him to say.  If he was the probate judge, he would want to get a lot more information before he would do any changing with respect to guardianship.

As famed American painter Thomas Kinkade leaves a holographic will, a battle over his estate is brewing between his soon to be ex-wife, girlfriend and children.  Retired Superior Court Judge of Santa Clara, California Eugene Hyman says that a holographic will is written in a person's handwriting, doesn't require eyewitnesses like a regular will but does need to have the intent of being a testamentary instrument and state the purpose of the will.  In the case of Thomas Kinkade's holographic will, the handwriting reads that he was leaving all of his possessions to his girlfriend. 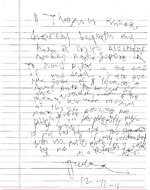 In his holographic will, Kinkade does not void any prior wills and while Judge Hyman is not sure if there were any, he says it is usually pretty standard fare to void any prior wills.  Hyman notes that Kinkade doesn't address his children in this will and if this happens, the assumption is that the person made a mistake by not including his children.  If you have two wills and the second will doesn't void all prior wills, the prior will still exists to the extent that they're not inconsistent, says Hyman.

Kinkade still has a wife, as their divorce is still not final, so she has her community property interest that she is still entitled to get, regardless of what any will says, according to Hyman.  Additionally, his wife is probably still entitled to administer the estate and if she doesn't want to or can't, then the children would have preference.  The girlfriend would be the last one appointed in this situation.

With a holographic will in avoiding probate, or avoiding the necessity of an attorney, one needs to address the tax aspects of the estate, which Judge Hyman says the average person is not capable of and good estate planning would be necessary to avoid probate.

Another issue with Kinkade's holographic will is whether he had the capacity to write the will or if he was under undue influence, given his history of alcoholism.  Judge Hyman says that if he were the wife or family member, he'd be attacking this as Kinkade might not have had the ability to do what he was doing and saying that he was of sound mind.

Judge Hyman believes there is going to be a settlement, given the $10 million + valued size of Kinkade's estate and he's pretty sure the girlfriend will receive a healthy chunk of change but that the family will get the bulk of the estate.

Katie Holmes has filed for divorce from Tom Cruise in the state of New York.  Given her possible issues with the religion of Scientology, Retired Superior Court Judge in California, Eugene Hyman believes she will receive more favorable treatment by a New York Court.  So, how does religion play a part in divorce?

Judge Hyman says that religion in a divorce case comes up very infrequently but when it does, courts try to stay out of it because of the concerns with respect to the First Ammendment and a person's right to practice religion, and scientology is a religion.   If one parent feels strongly that a particular religion is not in the best interest of the child, the religion is not in of itself a determining factor.  The question is is how it's practiced and what is in the best interest of the child when talking about the religion and if it's being practiced in a way that's detrimental to a child.

In the case of Katie Holmes and Tom Cruise, there are two other children, from his previous marriage involved and one might wonder if that would have an impact on any decision a judge would make.  Judge Hyman says that if he were the judge on this case, he would want to know how the other two children were doing and if there was any odd behavior.  He would want to know what Katie Holmes observed during times spent with the other two children in terms of religious practice.  He would also want to obtain information from a psychologist and see if there were any detrimental effects if the child was exposed to the religion.

Judge Hyman adds that in the state of California, religious promises made in a pre-nup are not binding because of the best interest of the child standard and that standard is viewed at the time this is brought before in a court.

One-Year Suspension for the Boys Who Bullied N.Y. Bus Monitor Too Harsh?

The bus monitor from upstate New York, who was bullied by four seventh grade boys, says she is satisfied with the one-year suspension they received as punishment for their actions.  Is this just punishment?

Retired Superior Court Judge of California Eugene Hyman says that as the punishment goes, there are still a lot of unknowns in the case.  It is not clear if these boys have had prior problems and as juvenilles, this information would not be released.  He would want to know what their psychological profile is and would hope that the school, in viewing the video, would have them evaluated by the school psychologist.  He would also like to know what their home life is like.

Judge Hyman feels that being removed from their home school for an entire year and receiving 50 hours of community service is a severe consequence, which, in certain cases is merited, but that is also not to say that there shouldn't be some accountability.   If they were being criminally prosecuted, under California law, one of the burdens of the prosecutor is to prove what they did is illegal.  An average 14-year-old knows what they engaged in is wrong but it goes to show that how you set up the system, that the presumption for someone under the age of 14 is that they are not responsible for their conduct.  Judge Hyman says this needs to be put into perspective, however, as these boys are young and foolish and again, he would need to know more about them.

Had this video not been publically viewed online, Judge Hyman feels they would not be punished as harshly.  "When cases become public, they take on a life of their own and a result, there is a cry for very serious retribution and this needs to be tempered with due consideration to all of the factors that are part of a case."

For celebrities, being a public figure comes with the territory.  The question is, what part of their private lives should remain private?

No one likes airing out their dirty laundry and high-profile people are no exception.  That’s why most celebrities and high-profile figures keep the details of their divorce settlements private, especially when child custody issues are involved.   Unless it is a juvenile case, it is impossible to seal an entire judgment, according to notable retired Superior Family Court Judge of California Eugene Hyman.  With good, smart lawyers however, parts of the judgment can be sealed.

Another alternative to keep judgments private is going to private judges, through arbitration or mediation where orders are made by the arbitrators or mediators and these orders reference certain documents.  It takes some effort if both parties want things private but as soon as one says no, it’s public.

Regarding child custody issues, in the divorce case of Tom Cruise and Katie Holmes, if Tom wanted to hypothetically send their daughter Suri to scientology camp and Katie says no and it can’t be resolved themselves, they would need to go to a courtroom, decreasing the likelihood it would remain private.

Source: www.celebuzz.comValuations of a child would remain private but the decision a judge would make would likely be public.  Parties can go to a private judge to keep things private as well.

Typically, when there is a child involved, both parties usually want to keep things private, as this is in the best interest of the child.  When this is the motivating factor, it is more likely both parties will work together to achieve that.

Eugene Hyman is a retired Superior Court Judge of California for the County of Santa Clara.  In addition to his numerous appearances on tv news shows, he is a featured commentator with The Legal Broadcast Network.  For more information, visit www.familylawchannel.com and www.judgehyman.com.