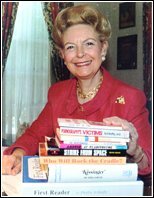 Phyllis Schlafly has been a national leader of the conservative movement since the publication of her best-selling 1964 book, A Choice Not An Echo. She has been a leader of the pro-family movement since 1972, when she started her national volunteer organization now called Eagle Forum. In a ten-year battle, Mrs. Schlafly led the pro-family movement to victory over the principal legislative goal of the radical feminists, called the Equal Rights Amendment. An articulate and successful opponent of the radical feminist movement, she appears in debate on college campuses more frequently than any other conservative. She was named one of the 100 most important women of the 20th century by the Ladies' Home Journal.


Mrs. Schlafly's monthly newsletter called The Phyllis Schlafly Report is now in its 42nd year. Her syndicated column appears in 100 newspapers, her radio commentaries are heard daily on 500 stations, and her radio talk show on education called "Eagle Forum Live" is heard weekly on 75 stations. Both can be heard on the internet.


Mrs. Schlafly is the author or editor of 20 books on subjects as varied as family and feminism (The Power of the Positive Woman and Feminist Fantasies), nuclear strategy (Strike From Space and Kissinger on the Couch), education (Child Abuse in the Classroom), child care (Who Will Rock the Cradle?), and phonics (First Reader and Turbo Reader). Her most recent book: The Supremacists: The Tyranny of Judges and How to Stop It.

Mrs. Schlafly is a lawyer and served as a member of the Commission on the Bicentennial of the U.S. Constitution, 1985-1991, appointed by President Reagan. She has testified before more than 50 Congressional and State Legislative committees on constitutional, national defense, and family issues.


Phyllis Schlafly is America's best-known advocate of the dignity and honor that we as a society owe to the role of fulltime homemaker. The mother of six children, she was the 1992 Illinois Mother of the Year.

On Nov. 12, 2008, the U.S. Supreme Court heard oral arguments in Pleasant Grove City v. Summum, a case that could change how public parks display religious messages such as the Ten Commandments. The Pew Forum provides a brief overview of how the case progressed to the Supreme Court and how the two sides -- a religious organization called Summum and a city government -- offer differing interpretations of the Free Speech Clause in the First Amendment to the U.S. Constitution to make their argument