Jan Schlichmann discusses the claims and the similarities to his Procrit case.

The Indiana Attorney General’s Office joined in a lawsuit along with 13 other states against Amgen Inc., alleging the pharmaceutical manufacturer illegally promoted its anemia-treatment drug Aranesp by offering physicians kickbacks and other illegal inducements to prescribe it. 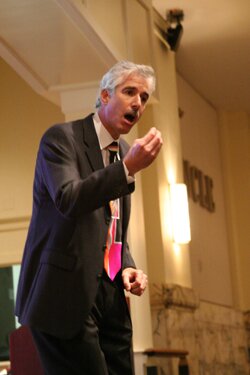 The multi-state investigation and lawsuit was initiated by a company whistleblower, a former sales and marketing professional in California, who came forward about alleged illegal marketing practices.

Under the federal False Claims Act, a whistleblower who exposes Medicaid fraud is able to share in any resulting monetary damages, through what is known as “qui tam” (pronounced “key tam”) litigation. In this qui tam case, a private individual filed suit in 2006 on behalf of the government to recover public funds wrongly paid due to health care fraud. The case remained under seal while the states and the federal government investigated.

“Today, we are intervening and joining the case as plaintiffs,” Indiana Attorney General Greg Zoeller said. “Our office wants to encourage whistleblowers to come forward so that pharmaceutical-marketing fraud is exposed and public dollars wrongly paid out are recouped.”

The Indiana Medicaid Fraud Control Unit or the MFCU – part of Attorney General Zoeller’s office – is handling the case in Indiana. Other states intervening as plaintiffs in the suit are California, Delaware, Florida, Hawaii, Illinois, Louisiana, Massachusetts, Michigan, Nevada, New Hampshire, New York, Tennessee, Virginia and the District of Columbia. The states today officially joined the lawsuit, filed in U.S. District Court for the District of Massachusetts, following a federal-state investigation.

-The defendants allegedly marketed an unapproved monthly dosing regimen of Aranesp for use in treating patients with chronic kidney disease who are not receiving dialysis.

-Since 2002, Amgen allegedly offered providers free “overfill” vials of Aranesp. The complaint alleges that providers were encouraged by the defendants to bill Medicaid for the free Aranesp product by submitting ineligible drug-reimbursement claims. This allegedly was intended to increase market share over a competing anemia drug, Procrit. The fraudulent reporting also meant the state Medicaid programs received rebate amounts lower than those to which they were entitled.

As a result, Medicare and Medicaid programs paid thousands of ineligible claims on Aranesp prescriptions potentially totaling millions of dollars, the complaint alleges.

Betweeen October 2005 to October 2009, Indiana Medicaid has paid $10,345,966.24 in total claims for Aranesp. The number and value of the claims that were ineligible in Indiana has not been determined, according to the MFCU.

Aranesp (darbepoetin alfa) is an injectable drug developed and manufactured by Amgen to stimulate and boost production of red blood cells in the body. Approved by the FDA in 2001 to treat anemia from chronic renal failure and in 2002 to treat chemotherapy-induced anemia, Aranesp has been a lucrative product for Amgen, with total sales estimated at $11 billion since the drug first was introduced on the market. The FDA in 2007 issued a “black box” warning – the most serious type of warning on a drug’s label -- due to potentially severe side effects from Aranesp, including increased risk of death, serious cardiovascular events and tumor growth. Physicians are encouraged to prescribe the lowest effective dose to improve blood counts enough to avoid transfusion, medical references say.

“The allegations in this lawsuit are disturbing. Pharmaceutical marketers promoting Aranesp used improper tactics to induce physicians to artificially boost sales of this drug, resulting in needless Medicaid claims where taxpayers got stuck with the bill,” Zoeller said. “If this lawsuit succeeds in recovering what the public has been defrauded, then we hope it will empower whistleblowers in other companies to bring to light similar medical frauds.”

Any employee in the health care field who is aware of fraudulent claims on Medicare or Medicaid is urged to contact the Attorney General’s office at 1-800-382-1039.

“This lawsuit allows us to recover Medicaid money that Amgen should never have claimed. At the same time, it allows us to handsomely reward an honest whistleblower,” Allen K. Pope, director of the Indiana Medicaid Fraud Control Unit, said. “Through Medicaid, our society gives our neediest neighbors the best health care in the history of the world, for free. Unfortunately, someone at Amgen perceived Medicaid not as an opportunity to serve, but as an opportunity to fleece the taxpayers. Taking on this lawsuit is our way of punishing that conduct and encouraging good.”

A whistleblower who becomes a plaintiff or “relator” in a qui tam lawsuit could share in a percentage of any money recovered. In a previous qui tam case involving drugmaker Pfizer Inc., two groups of whistleblowers are receiving 15 percent and 18 percent respectively of a $1 billion settlement Pfizer agreed to pay in September.

In today’s Amgen case, the original whistleblower suit was filed in 2006 in U.S. District Court for the District of Massachusetts. The lawsuit, Kassie Westmoreland v. Amgen et al, had been under seal until today, when 14 states and the District of Columbia joined the case as intervenors. The intervening states seek treble damages and civil penalties.